(Good) News from the UK

". A slight move a gauche.
the results of the French elections have received a great deal of press in our national newspapers as we look across La Manche to see what is going on. A move to the left ( at last) this has also happened in many parts of Britain with the recent local elections last week in many of our larger cities.  The Tory right and the Liberal Democrats lost many local seats and Labour gained.  Labour did not manage to gain the job of London mayor that stayed with our typically British "buffoon", Boris Johnson, but they did gain many local seats in London. It was a very poor turnout of British voters - was it apathy, despair or just the rain?

Anyway good news for France to be seen to be moving into a more left leaning democracy.    There has been some good coverage on the Guardian French section website - have you ever looked at this?  See the Guardian website for more info.  I have sent a link on to a cartoon from Steve Bell - one of the great cartoonists in UK today


there also a locally produced song  that does pick up some of the themes of the last year of this coalition government a life in a Con Dem nation.   http://www.youtube.com/watch?v=lDXMlxrDDFs   One of the cabinet ministers Jeremy Hunt is about to be taken to a public inquiry about his role last year in the decisions on Rupert Murdoch and domination of the press/media etc 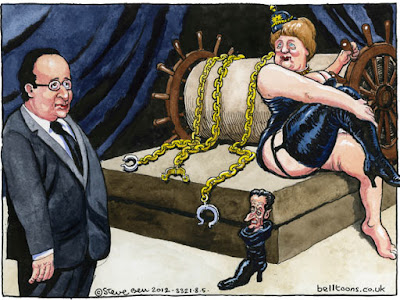 No weasel was harmed during the making of this blog !